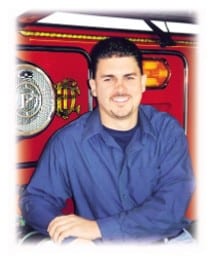 Dan Barton had a charming personality, beautiful smile, a big heart, and was a friend to everyone he met. Working toward his lifelong goal of following in the footsteps of his father to become a firefighter, Dan had received his EMT and Firefighter 2 Certifications, and completed the Carpentersville Fire Academy.

He was offered a position with the Carpentersville Fire Department just after being admitted to Loyola University Hospital for leukemia treatment, and was looking forward to joining the ranks of firefighters when he recovered. Dan's friends and family lost the enthusiasm, enjoyment and love he brought to their lives when leukemia claimed him on July 7, 2001, at the age of 26.

To pay tribute to Dan's love of motorcycles and fast cars, his chapter hosts "Cruisin' for a Cure", an annual car and motorcycle rally. Since they formed in 2002, the chapter has raised more than $40,000 in his memory.