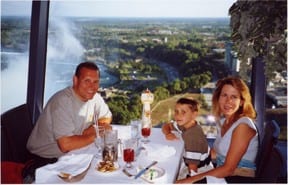 He was diagnosed with AML on March 31, 1994, when his wife was five months pregnant. After three rounds of heavy chemotherapy, he went into remission, but relapsed within months.

Years later, Frank is in remission, and served as President of the Foundation from 2006 - 2009.

In 2002, Frank and his family formed the A La Vida Chapter, which means "To Life." Fundraising events so far include a salsa contest and a golf tournament.